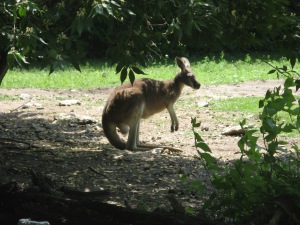 When it comes to wildlife, it’s their planet and we’re just living on it. No matter where humans live, they are going to come into contact with all types of wildlife. Where I live in Massachusetts, there are constant stories about deer, coyotes and bears, often found roaming the suburbs. There are also numerous stories of deer being hit by cars and either wounded or killed. That sort of dangerous and deadly contact with wildlife happens everywhere and it is often volunteers who help to nurse or rehabilitate the wounded animals. This article from Australia describes the massive number of animals who are killed in accidents with motorists. It also mentions volunteers who help to rescue and rehabilitate the animals, including kangaroos, wallabies, possums and many other species.

More information here bout the Wildlife Information Rescue and Education Service, which leads much of the effort.